Despite it being the middle of winter, I am looking forward to Spring. It feels like the longer and warmer days are right around the corner! And for me, Spring is the season of brunch. I think its because my family and I have always celebrated the classic Spring holidays, Easter and Mother’s Day, with brunch. The family gathers and we eat and enjoy the works! I’m talking bagels, eggs, bacon, fruit, and of course my favorite part, the sweet dish of sorts. This could be a coffee cake, donuts, or even monkey bread but my favorite has got to be a deliciously sweet french toast bake. I wanted to bring my own version of a french toast bake to your tables this spring, and let’s be honest to my own table too! And let me tell you after you try this Cinnamon French Toast Bake, you will always want it on your table.

Let me tell you guys about this cinnamon french toast bake! I have perfected it. This recipe took multiple tries to nail because I knew exactly how I wanted it to taste and wouldn’t settle for any less! And to make things even better this french toast bake is inspired by cinnamon rolls. Yup. They are bursting with cinnamon flavor and even have a simple cream cheese frosting situation that really seals the cinnamon roll deal. This fluffy bake literally feels like you’re eating cinnamon rolls, but in the form of an easy casserole!

This Cinnamon French Toast Bake is actually incredibly easy to make and only calls for a few ingredients! This recipe requires some more classic and indulgent ingredients like a rich brioche loaf, butter, and cream cheese. But it also has healthy swaps in the form of pure maple syrup instead of your classic sugar and almond milk instead of heavy cream! This french toast casserole is a perfect example of my recipe style, a little classic and a little better-for-you.

How to make Cinnamon French Toast Bake from scratch…

Next cut the brioche loaf into cubes. Grease a large baking dish and add the cubes to the dish.

Pour the egg mixture over the bread cubes. Mix around the cubes with your hands or a spoon and make sure every cube is evenly coated. Then sprinkle with some extra cinnamon.

While the bake is in the oven, start making the cream cheese frosting. Soften both the butter and cream cheese and combine. Also mix in the vanilla extract and maple syrup until smooth.

Remove the french toast bake from the oven and let cool slightly. Drizzle or spread the cream cheese frosting on top of the bake. Sprinkle with some extra cinnamon.

What type of bread is best for this french toast bake?

I have only tested this french toast bake recipe with brioche, so that is the type of bread I recommend using. Brioche is such a rich and buttery bread that just makes this bake absolutely delicious. However sourdough, french bread, and challah are also great for french toast.

How do you keep cinnamon from clumping in french toast?

If your cinnamon is clumping in your egg mixture it is okay. Do not worry! My cinnamon clumped while making this but the cinnamon was still distributed deliciously through the dish. You can whisk the egg mixture to try and break out the clumps, but when you pour the it over the bread cubes and mix around the cinnamon will be spread.

How to best store and serve this cinnamon french toast casserole?

This french toast casserole is absolutely best served fresh! I recommend serving right out of the oven and enjoying with a drizzle of maple syrup.

This recipe can be stored in the fridge in an airtight container for about a week, but is not the best to heat up. You can re-heat in the microwave, however the french toast could become more soggy than you would like. Therefore, I recommend enjoying on the day you make this delicious brunch recipe!

Check out some other recipes perfect for brunch…

If you make this Cinnamon French Toast Bake or any of my other recipes I would absolutely love to know! Tag me @wellnessbykay on instagram, so I can see and share your recreations!!

Love this recipe? Leave a comment and a rating! I love to see and it helps me continue to develop delicious recipes for this blog. 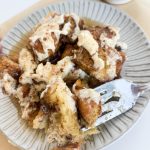 Cinnamon french toast bake is the best recipe to add to your brunch spread!  Made with brioche and cream cheese frosting, this quick and easy recipe tastes just like cinnamon rolls but in the form of an easy casserole.  This delicious recipe is made with a few healthy swaps too! 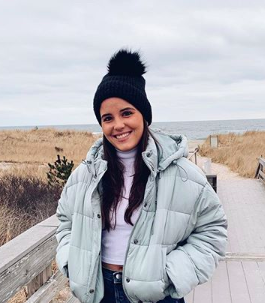 Welcome to Wellness by Kay, I'm so glad you've stopped by! Here you will find mainly healthy recipes with a touch of more indulgent ones too. I can't wait for you to try them out! Happy cooking!!

get to know me better

For more delicious recipes, daily eats, and snippets of my life connect with me on social media!