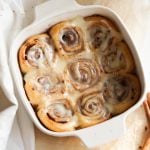 Crescent Roll Cinnamon Rolls use refrigerated pre-made dough and are ready in about 30 minutes. Somewhere in between homemade and straight from a tube … these easy cinnamon rolls have an ooey-gooey delicious cinnamon sugar filling, are fluffy on the inside, and golden on top. Plus they’re complete with a sweet & simple cream cheese glaze! Sure to be a family favorite in no time.